From Stellar Empire
Jump to navigation Jump to search 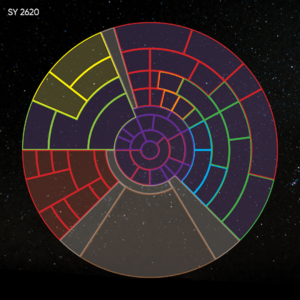 The Rhyno Confederacy at its height of power, ruling over ¾ of the known galaxy through direct control or vassals.

The Rhyno Confederacy was the largest empire in the recorded history of the galaxy. Their legacy is seen throughout the galaxy on precursor artifacts, cavernous floating starship graveyards, and races who were ‘uplifted’ beyond their natural progression.

The Rhyno people claimed to be the progenitors of all galactic life, sending their seen into the galaxy predating time itself. This claim is unverified.

Records predating the Confederacy are rare, and many are considered lore. Only the Neodahl, a splinter faction made up predominantly of dissident Dahl, claim to know what had come before and attempt to convert believers to the Hallowedark.

Most contemporary scholars believe the Rhyno Confederacy was mainly filled with empty space, failed colonies, and very little actual planetary control. The remaining evidence, predominantly first hand testimonies by surviving Neupert’s, claim their empire was as large and diverse as the history claims, yet existed mainly in prefectural pockets like their own.